Home CAR BATTERY TIPS Why Does My Car Battery Get Hot When Charging? 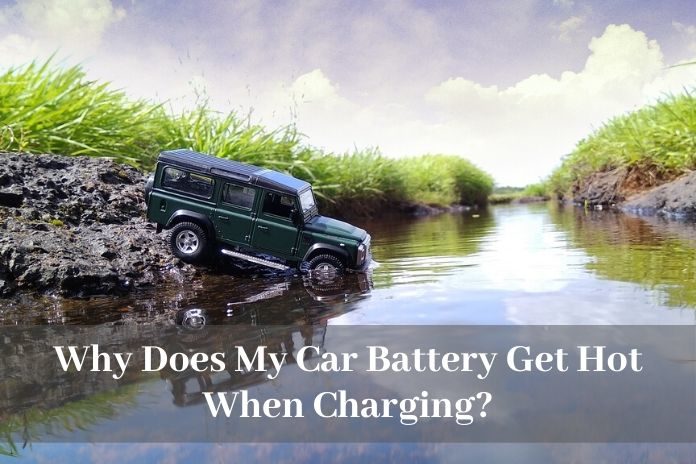 It is normal for the car battery to get a little warm after a usual drive any time of the day. This might be due to the engine heat or you may be carrying quite a heavy load on your car.

However, when it gets hot, does it mean that there is need for worry? Yes, actually when your car battery gets hot, it means that there might be an issue with the charging system that needs your attention.

The car battery tends to get hot after driving and this might be due to some complications in the car itself. Such as the alternator or the battery itself.

What it Means When Your Car Battery Gets Hot?

If your car battery gets very hot, you actually need to worry and try get to the root of the problem. The charging system might be experiencing some difficulties hence the making the car battery that hot. For one, if your battery is a weak one, the alternator might be having to work twice as hard to charge it. This abnormal process then makes the battery and even parts associated with the charging system to heat up.

Secondly, the alternator you have might be having some issues. It might be a faulty one, and hence causing the complications and heating up of the car battery. For instance, its voltage regulator might be broken and hence leading to the battery being overcharged. If this is left unattended to, there might be a lot of damage on the parts of the battery and the alternator.

Why Would Your Car Battery Heat Up?

You need to panic if your car battery gets hot every time you come back for a drive and go check up on it. The major reasons that cause the car battery to get heated up are discussed below:

1. Overcharging of the Battery. One reason for this might be because you might be working with a wrong charger or one with inappropriate charger settings. This can lead to destruction of the battery altogether making it to explode, experience leakage or even lead to a hazardous fire.

10 amps is the maximum you should go in case you are looking for a good and appropriate charger for your car. 7 or 6 amps might be ideal as it might be slower but you are assured of a complete charge. This creates the capability of the battery absorbing the most amps it can.

Going beyond the 10 amps level, say 50 amps, might be hazardous for your car and even the car battery. This shows that you want to completely charge the battery within the least time possible. This is not advisable as you might be straining your battery with this type of charging.

Another reason for overcharging of the battery is that your alternator might be damaged. An alternator converts the mechanical energy into electricity which is then passed on to the voltage regulator which then uses it to charge the car battery.

The two, voltage regulator and alternator, have to be in perfect condition for them to function well. If either of this has a complication, the car battery will begin overcharging or even fail to charge completely. Failing to charge will make the battery discharge at a very fast rate and thus lead to its overheating.

Related Article: Can You Overcharge A Car Battery?

2. Internal Short. This is a term used in the case where there is a complete circuit occurring in the particular car battery. this might be the case after physical damage or a hit causes the battery to be unable to store energy and ends up depleting the charge obtained on its own even as it rests.

A “soft short” is used to describe a situation where the lead on the car battery plates flake off after some time in the process of discharging and recharging.

3. A Heavy Draw that is Placed on it. The car battery is designed in a way that it has a limit on the rate it converts chemical energy to electrical energy-this is when it is being used. When the car demands a lot from the battery, then it begins to heat. This is because it will be unable to efficiently produce adequate chemical energy that is needed from the car.

4. Heating of the Car Engine. Heat from the surrounding might be the reason why your car battery might be getting overheated every once in a while. The engine, for one, get overheated and transmits the heat to the car battery and this might be adding heat to a car battery that is already being heat by the above factors.

Radiant heat from below might also cause the heat. It is advisable to keep the car running to enable circulation of air that would help cool the car battery.

5. Terminal Connections Might Be Getting Hot. The terminals might be the ones generating the heat. This might be the case when there is a loose connection, you have to ensure that the terminals are tightly connected to avoid complications arising from this part of the car battery.

Loose connections cause an arc with electric energy being generated and as they try to fill the space in between, heat will be generated. You should also avoid wires that are inappropriate for this task as they can turn out to cause damage. Wires that have small gauges lead to the charging experiencing complications and hence heat is emitted.

A good driver has to check up on their car before and after a drive to see if everything is okay with it. it would be a situation gone worse when you realize steam or bulging on the bonnet of your car. This may mean that a huge damage might have been done, which would have been avoided had you taken prior action.

It is also advisable to note that the car battery is designed in a manner that only allows it to charge and discharge at a particular rate, if not it will be unable to and this might cause certain complications.